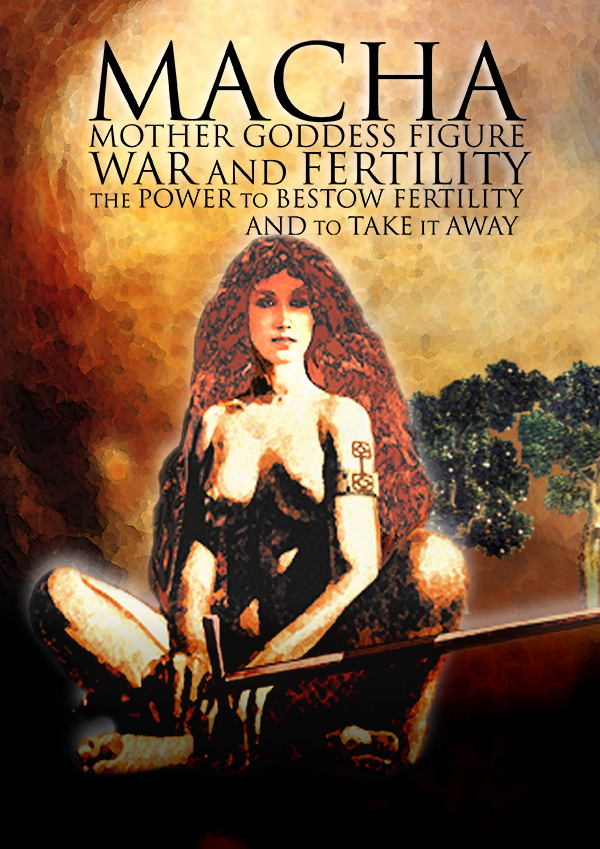 The Curse of Macha

There was once a man of Ulster named Crunden. He was a farmer, and a good man, but he had had a terrible misfortune. His wife had died, leaving him with three young children and no way to take care of them. His house was in disarray, and every day he had to get up and leave his young children to go and work in the fields, knowing that this was no way for them to be raised, but having no other option.

One day, when he came home from a long day at work, Crunden opened the door, expecting to see the usual shambles. To his astonishment, the house was neat as a pin, the children all clean and quiet, and a beautiful woman sat by the fire, cooking the dinner. The woman told him her name was Macha, and she had decided to be his wife. Not one to argue with this great fortune, Crunden settled in to married life.

Macha was a perfect wife to him, keeping the house clean and the children happy, and taking perfect care of Crunden. He knew she was a woman of the otherworld by the way she moved: she could run so swiftly that her feet barely touched the ground, but she never made any fuss over this, only going about her business as a wife and mother.

One day, the king of Ulster summoned all his people together for a feast, to celebrate his purchase of a fine new team of chariot-horses. Crunden was excited to go, but Macha took him aside and warned him not to speak of her, not to boast about her, or he would bring disaster down upon them. Crunden promised he would not, and away to the king’s feast he went.

The new horses were beautiful, grey and swift and perfectly matched, and the feast was a great one, showing King Connor’s great generosity. Crunden ate and drank, along with all the other people at the feast, but he remembered Macha’s warning, and when the other men began boasting about the beauty of their wives, he kept his mouth shut. When the other men started boasting about the cooking of their wives, Crunden bit his tongue. But when the king boasted that no creature in Ireland was faster than his new horses, Crunden could not keep quiet any longer and bragged aloud that his wife was so swift, she would beat the king’s horses in a race.

Stung by this, King Connor ordered his men to seize the boastful farmer. He demanded that Crunden send for his wife, and if she did not come to prove the truth of his statement, Crunden would pay for his lie with his life.

Men were sent to Crunden’s house, but when Macha opened the door, they could see that she was heavily pregnant. Nonetheless, they told her what her husband had said, and that if she did not make good his boast, he would pay for it with his life. Macha agreed to go with them, with a bad grace.

When she came before the king, Macha begged him to consider her condition, and postpone the race until after she had given birth and had time to recover. But the king had been brooding on the insult Crunden had given him, and he refused her plea. Then Macha turned to all the warriors of Ulster, the Craobh Rua, or Red Branch, assembled there, and asked them to intercede, to protect her. She reminded them that each one of them was born of a woman, and that it was not right for them to put her in this position. But none of them stepped forward for her, none would plead with the king. They had been drinking at the feast, they were eager to see this race, and see their king put the boastful farmer in his place.

Something about Macha must have given King Connor pause, because before the race, he had his charioteer strip back all the decorations on his chariot, all the cushions and cloths that made the ride easier, till the king’s chariot was barely a plank of wood with wheels, as light as it could possibly be. He then stripped off his armour and heavy cloak till he stood in his lightest linen tunic, and dismissed his sister Deichtre, who was his charioteer, and took the reins of the chariot himself. Macha waited.

The race was held on the grass outside of the king’s fort, where there were no stones or uneven ground to trip the horses or foul the wheels. All the men of Ulster gathered there to watch, as the king and Macha raced.

The king raced his matched horses, and they ran as swift as the wind, moving in perfect unison, pulling him so fast he felt he was flying. But if the king raced as fast as the wind, Macha ran faster. She outpaced the wind itself. Her feet seemed barely to touch the ground. But as she ran, the birth pains came on Macha, and she began to scream.

All the people watching felt suddenly that this was not the great sport and entertainment they had thought it was.

Screaming in agony, Macha ran the course, and crossed the finish line with her belly protruding in front of the noses of Connor’s horses. Then, having won the race, she collapsed onto the grass, and in a rush of blood, her twins were born, still and dead. She gathered them into her arms, and put a curse on all the warriors of Ulster.

For failing to use their strength to defend her in her time of need, Macha declared that their strength would become useless to them. Whenever they needed it most, their strength would desert them, and for nine days and nine nights, they would endure the pains of a woman in childbirth. This curse would last for nine generations: each fighting-man of Ulster, as soon as he was old enough to grow a beard, would come under the curse.

With that, Macha gathered her dead twins, leaped over the heads of those watching, and ran off, never to be seen again. And from that day forth, the fort of the King of Ulster was known as Emain Macha; the Twins of Macha.