Wisdom, Poet, Seer and a Warrior

Here are some of the most significant connections and insight from participants and collected by the Bard team:

Connection 1 – Triple Fosterage – 3 mothers
The remarkable mothering of the young boy, Demne, could be seen as triple mothers: Muirne, Bodhmall and Liath Luachra was a great start for any child.  It was also a reminder of the Triple Goddess, so important in the Mythological Cycle.  This start, it was felt, would build a wise, courageous, soulful and nature loving child.

Connection 2 – The Natural World – Animal Symbolism
There was considerable imagery taken from the natural world and this was clearly a ‘source of wisdom’.  Salmon of Knowledge, deer and speed of foot and mind, crane/oxter bag as a source of needs met and insight.  What also seemed to be evident was nature as a source of abundance.  And the naming of the young man as deer (Demne) is a clear natural world direct association.

Connection 3 – The Context of Fear
It felt as if the atmosphere of brutality was evident following the Battle of Cnoca – the first Civil War.  A climate of fear, revenge and slaughter was evident and was the world into which Demne/Fionn was born.  His early life was absolutely one of great danger.

Connection 4 – The Importance of Generosity
The recurring theme of generosity was evident in Fionn’s natural and immediate response to the woman who has lost her own son.  This provided a cyclical linkage to his father, Cumhail and the battle at which the oxter/crane bag was lost.  It also enabled Fionn to recover the ‘bag’ – a reward which was connected to the generosity, but was not his motivation.  He didn’t know.  Also Finneagas’s generosity to Fionn when he has clearly lost what he most desired – the salmon’s great knowledge.

Connection 5 – The Consequence of Reflex
Finn’s tasting of the salmon had life altering consequences.  But it was a reflex reaction and indeed had to be for it wouldn’t have worked if he had tasted the salmon deliberately.  It was also a reflex reaction to help the mother of the murdered child.  Echoes here of Parsifal who asks the question of the Grail King in an innocent reflexive way.

Connection 6 – Wisdom and Thumb sucking
The access to the wisdom of the world is through Fionn ‘sucking his thumb’.  This seems to represent the natural wisdom of the child that is suppressed and lost in adulthood.  Is this why parents admonish it?  Fearing their children will become wiser than them?  This is the ‘emperor’s new clothes’ story.

Connection 7 – The Values of the Fianna
The three core values of the Fianna were strength of limb, purity of heart and actions to match their words.  The focus on body and heart (emotion) as well as consistency between ‘say’ and ‘do’.  Not evident among so many leaders.

Connection 8 – The Fionn HeritageThe link with Fintan MacBochra with Fionn was clear.  This makes the centrality and consistency of ‘wisdom’ within this tradition.  It also comes across from one cycle (Mythological) to another (Fenian).

Connection 9 – A Lesbian connection
What exactly is the nature of the relationship between Bodhmall and Liath Luachra– two warrior women who live together.  Just a (modern) reflection.

Wave 3 – Fintan and the Hawk of Achill 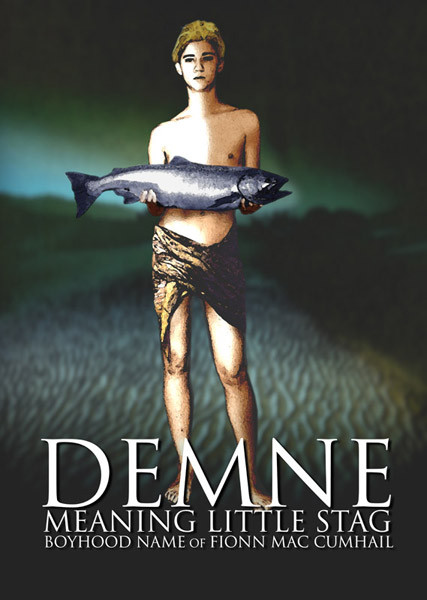