The visit to Tir na nÓg – and the return

Oisín’s journey to Tir na nÓg with Niamh Cinn Oir, Niamh of the golden hair, is one of the most loved and most familiar of the Irish Myths. Here is a short version of what was told to the participants…..

A young woman, Sadbh, has been cast into the shape of a deer by a dark druid called Dorcha.  This is after she has refused his amorous advances. Shortly after Fionn MacCumhail is out on a hunt with his hounds, Bran and Sceolan. They soon pick up the scent of a deer. It soon becomes apparent that this deer is special, is enchanted.  When they catch up with the deer, and the hounds are playing with the deer in front of a rowan tree.   the deer turns into a beautiful young woman who tells them her name is Blaith Dearg, the daughter of Finn’s great enemy, Dearg.

She invites Finn to join her for the night.  He accepts. They do lie down together. But when he wakes Blaith Dearg is gone.  However,  one year later Fionn returns with his hounds and they find a baby sitting in the grass.  This is Blaith Dearg’s baby, his baby.  Fionn takes him, raises him as his son. He calls him Oisín.

Oisín grows into a beautiful young man. He passes all the tests to join the Fianna with ease.  He is much loved and his fame spreads through the land.

One day while Oisín is sitting on the beach at sunrise, the sunlight turns into a vision of a woman with golden hair on a white horse.  She invites him to come and live with her in Tir na nÓg, a land where you live for ever.

With a love for Niamh and for adventure he leaps on the horse and heads out across the waves to the land of eternal youth.  They live there happily and have three children together.  However, Oisín still misses his home with the Fianna.  Niamh distracts him with feasts and hunts.  Eventually he insists he must go. She tells him he must not set foot on the land of Ireland or he will never be able to return to her and the children.

He finds the land has changed beyond recognition.  His heart is broken.  He sees four men in a field trying to move a boulder.  With a kind heart he leans over to help.  As he leans the girth of the saddle snaps and he steps on the land of Ireland.  He turns into an old man.  They tell him of the arrival of St. Patrick to Ireland.  When they meet Patrick tells him of the promise of eternal life.  When Oisín learns Fionn was not baptised, he says he prefers to stay a pagan than join a heaven which would not let his father in. 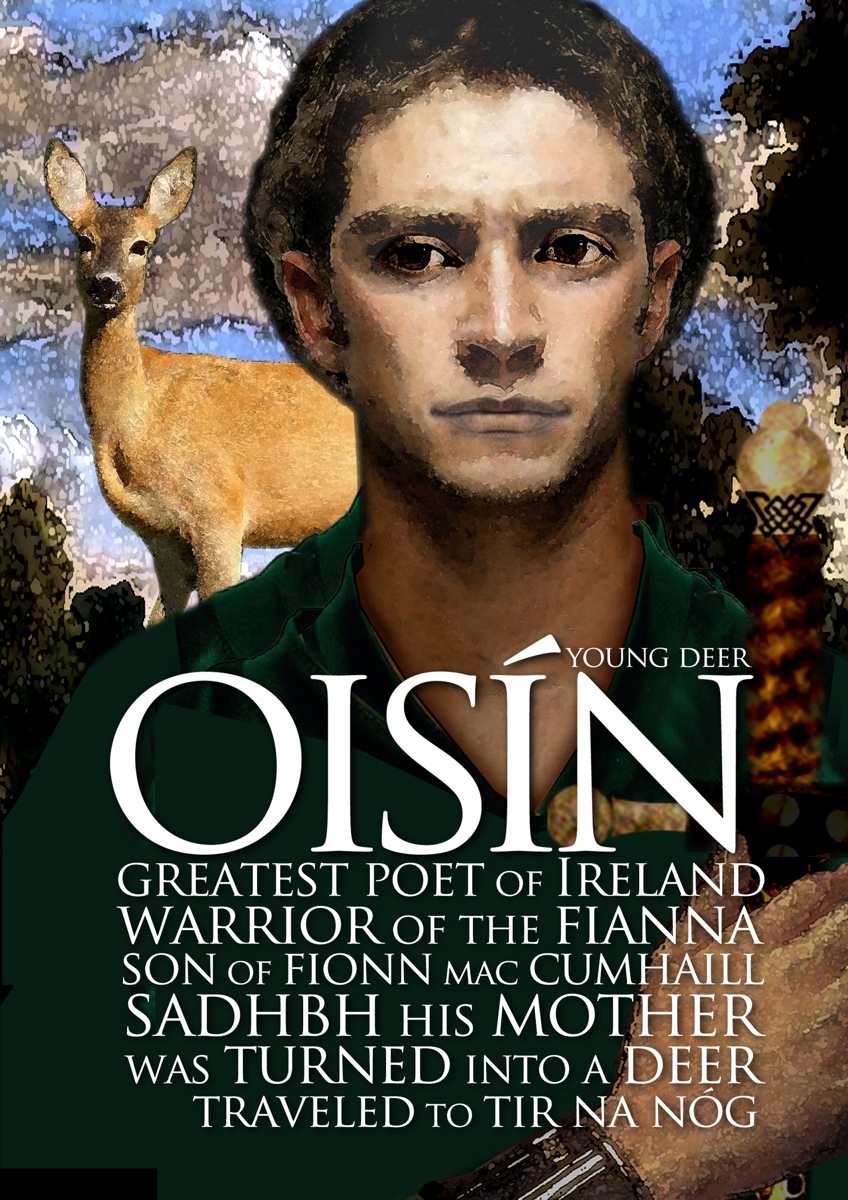 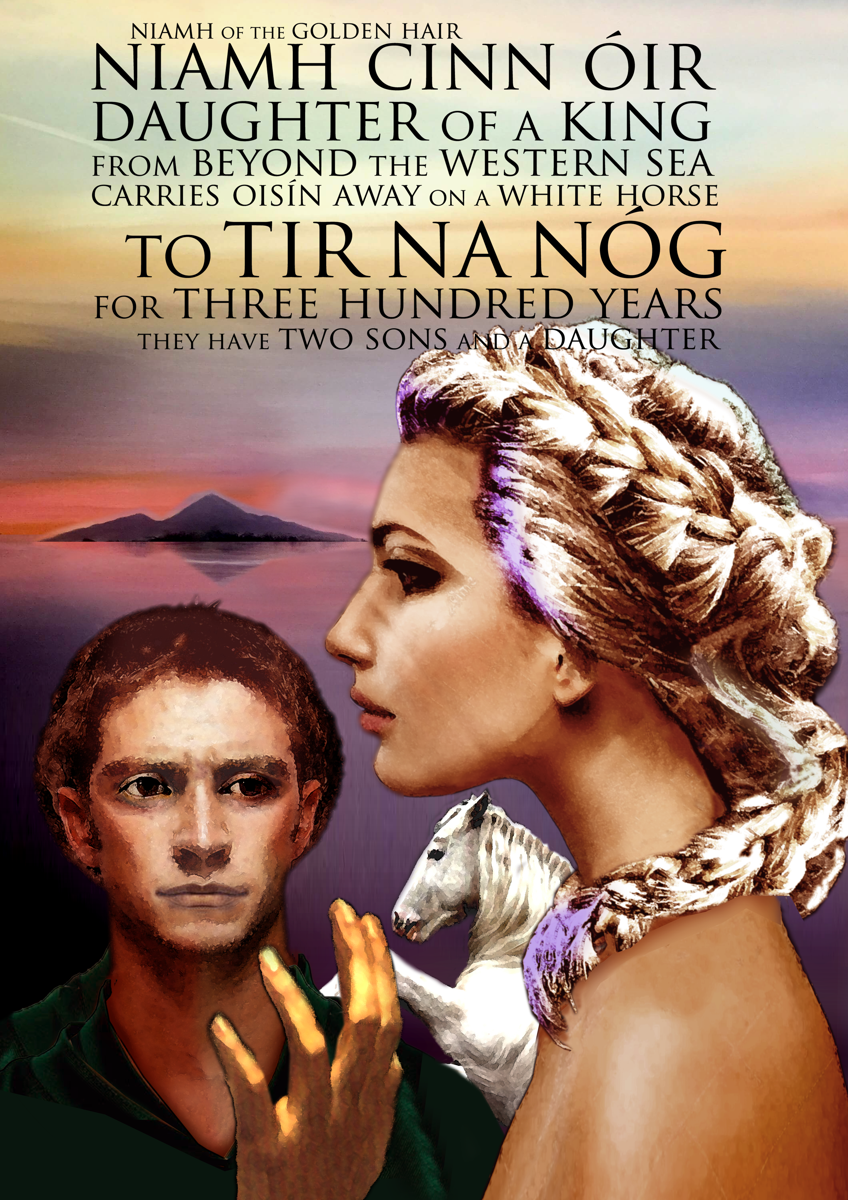 Here are some of the most significant connections and insight from participants which were collected by the Bard team in the breakout meetings and the big group sessions at the event:

Connection 1 – Innocence and cruelty, humiliation and danger
The dark druid Dorcha was humiliated by the refusal of the young girl. He takes revenge – he turns her into a deer.  She in turn is humiliated by the expectation she will take an old man as a husband and also humiliated by a patriarchal power of structure which did not support her in her refusal or protect her when she asserted her own desire.  She had no opportunity or desire to get revenge.  But, when the complete power structure is against you, your options for justice and restitution are minimal!

Connection 2 – When bad things happen to a good person
This  story was seen as  the uninvited encounter and unasked for transformation in which the woman has no agency.  It is the ‘maiden with no hands’ initiation that Pinkola Estés highlights in her Heroine’s Journey.  The transformation is surely traumatic.  Psychologically a disconnect with the self and something that can cause a person ‘not to recognise herself’.

This encounter is the ‘rude awakening’ experienced by so many women in every part of the world.  But in some it is arranged marriages, wage slavery (labour exploitation) and outright slavery and trafficking.

Connection 3 – Symbolism of the Rowan Tree
When Fionn catches up with the hounds they are playing with the deer in front of a Rowan Tree.  The Rowan Tree has a rich symbolism in the mythologies of Greece, Scandinavia and the British Isles.  The theme is of protection and as a tree of the Goddess and a symbol of linkages between worlds, between heaven and earth.

Connection 4 – Sense of Paradise lost
There are a number of sadnesses in the story that were noted by the group. This is within a context of what would appear on the surface to be a happy place, Tir na nÓg. The place where Niamh takes Oisín comes with a promise of eternal happiness and youth. These sadnesses included the obvious loss of Fionn, Oisin’s father, because he has left that world. There is also the loss of the world of the Fianna. Then when he leaves there is also the sense of ‘paradise lost’ as he has to leave Tir na nÓg.

And finally there is the sadness of finding the world he returns to is no more.  And then he becomes a shrivelled old man. The return journey as we learn from Joseph Campbell can be more fraught than the withdrawal!

Connection 5 – Perfection is boring
One of the insights reflected by the group was how the perfection of the  ‘other world’ is ultimately boring.  It is, in a strong sense, one dimensional.  What becomes apparent is that Tir na Nog is not everything it is cracked up to be. We actually need our people, our family and friends our community, a sense of challenge, the ups and downs of life and even death!  Ultimately Oisín rejects perfection, rejects what seems to be a heaven.

Connection 6 – Time is upended
It is clear that leaving this world is to upend time.  In Tir na nÓg what seems like days is actually decades.  This becomes all too apparent when Oisín returns to Ireland. In the western world we have such a linear concept of time. Here time takes on a very different hue!

Connection 7 – A Hero’s Journey
What was noticed is that Oisín may have done great things to join the Fianna.  He is very successful at all the quests.  But on this journey he doesn’t have to do anything particularly heroic.  This seems to be in the same vein as the ‘bored of perfection’.  We need challenges, tests and trials.  Our images of perfection and heaven are, in this regard, rather shallow.

Connection 8 – Oisín encounters Patrick
This is one of the great confrontations in Western culture. Here the great missionary meets the great pagan hero.  They are portrayed as two individuals of honour in their own right and each living their own realm.  What was noted was how much respect Patrick had both for Oisín and how much he enjoyed the stories.  So much so he asked his scribe to write them down.  The participants picked up this moment and wrote ( John McFadden) and performed a play based on Acallam na Senórach.

This deep respect for the ancient tradition evidenced in St Patrick’s response was seen by some  as being in marked contrast to how the Church subsequently tended to  treat the ancient stories and heritage.   The wisdom tradition came to be described as Pagan in many, but not all, cases.

Connection 9 The Popularity of the Fionn Tradition
For much of the last millenia, it was the Fionn tradition that had far more of a hold on the Irish (and European McPerson’s Ossian) than the Cú Chullain/Tain tradition. It was the Celtic Revival that out Cú Chullain in a more central position!