The woman pulls the strings… not Fionn… or does she?

Long ago in Ireland one of the greatest and most famous warriors under Fionn MacCumhall’s leadership was Diarmuid O’Duibhne.  What we know and it is important, is that he is under a geasa (a command)  that he could never pierce the skin of a pig.

Diarmuid grew up as a great warrior and successfully passed all the tests to join the Fianna.  He was full of love and loyalty to Fionn MacCumhall.  But he had on his forehead a love spot that caused any woman who saw it to fall in love with him.  He covered the magical spot with his hair because it was becoming problematic.

The leader of the Fianna, Fionn, had meanwhile decided that  he needed a wife.  It was agreed that the only suitable woman was the daughter of the High King, Cormac, the beautiful Gráinne.  But unbeknownst to all Gráinne had earlier, as a twelve year old, seen Diarmuid O’Duibhne and his love spot as he was playing and the wind had  blown his hair back.  She had fallen in love.

But now the great Fionn had seen Gráinne and had asked to marry her. She, having refused many men, and feeling flattered at the High King’s attention, agreed to the marriage.  A great feast is arranged to celebrate the wedding.

The day arrives and soon after as the guests arrive Gráinne sees again the love of her life, Diarmuid. She puts a geasa on him to run away with her.  He is torn horribly between duty to Fionn and duty to the geasa.  But he has to go with Gráinne.

And so begins one of the great pursuits in Irish Myth, Fionn hunting not an animal but his beloved Diarmuid.  It is a pursuit the length and breadth of Ireland. There are many encounters and many escapes. The other world becomes involved. Fionn is furious at the betrayal. The pursuit is far and wide.

Eventually the two lovers settle down in Kishicoran and start to build a life together.  In time Gráinne decides to try to make peace with Fionn.  He appears to agree and the two men, Fionn and Diarmuid go hunting together, but a great boar appears and gores Diarmuid.  Fionn could have healed Diarmuid with water, but remembering his anger, lets it slip through his fingers.  The geasa has worked itself out.  Diarmuid unable to pierce the skin of the boar has consequences.  The great love story is over! 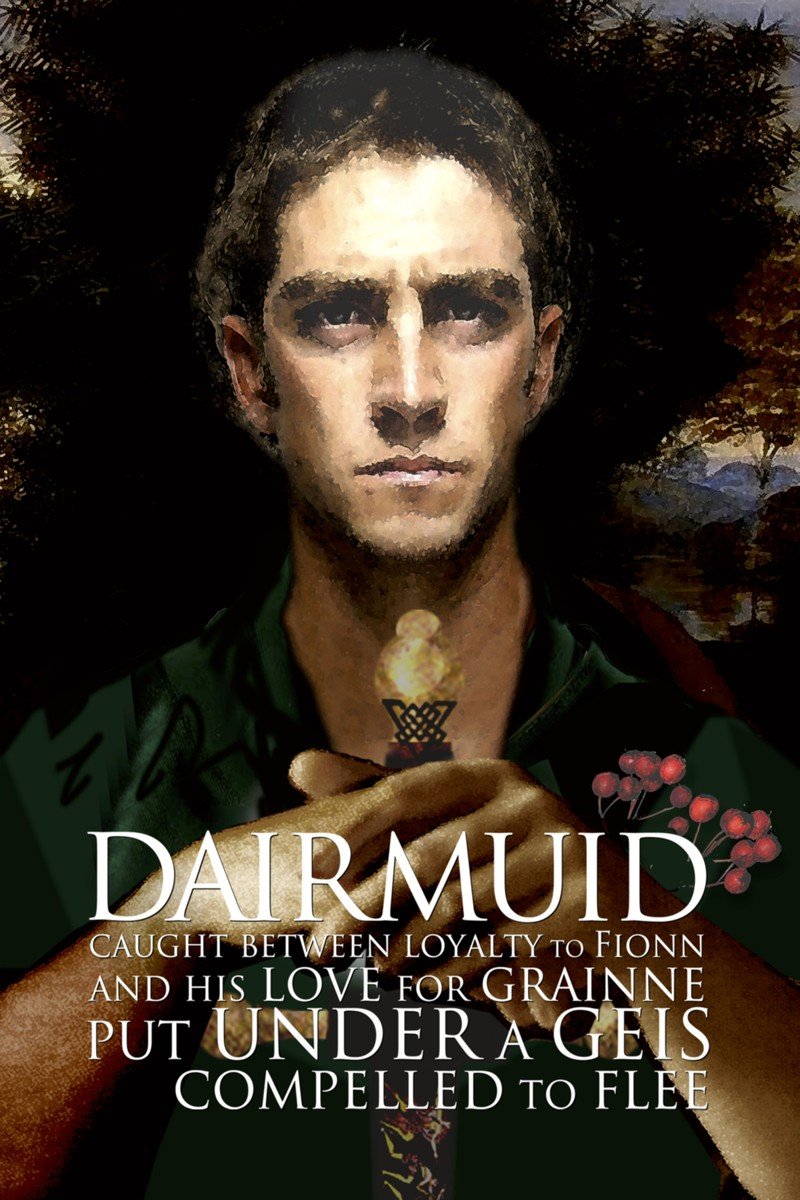 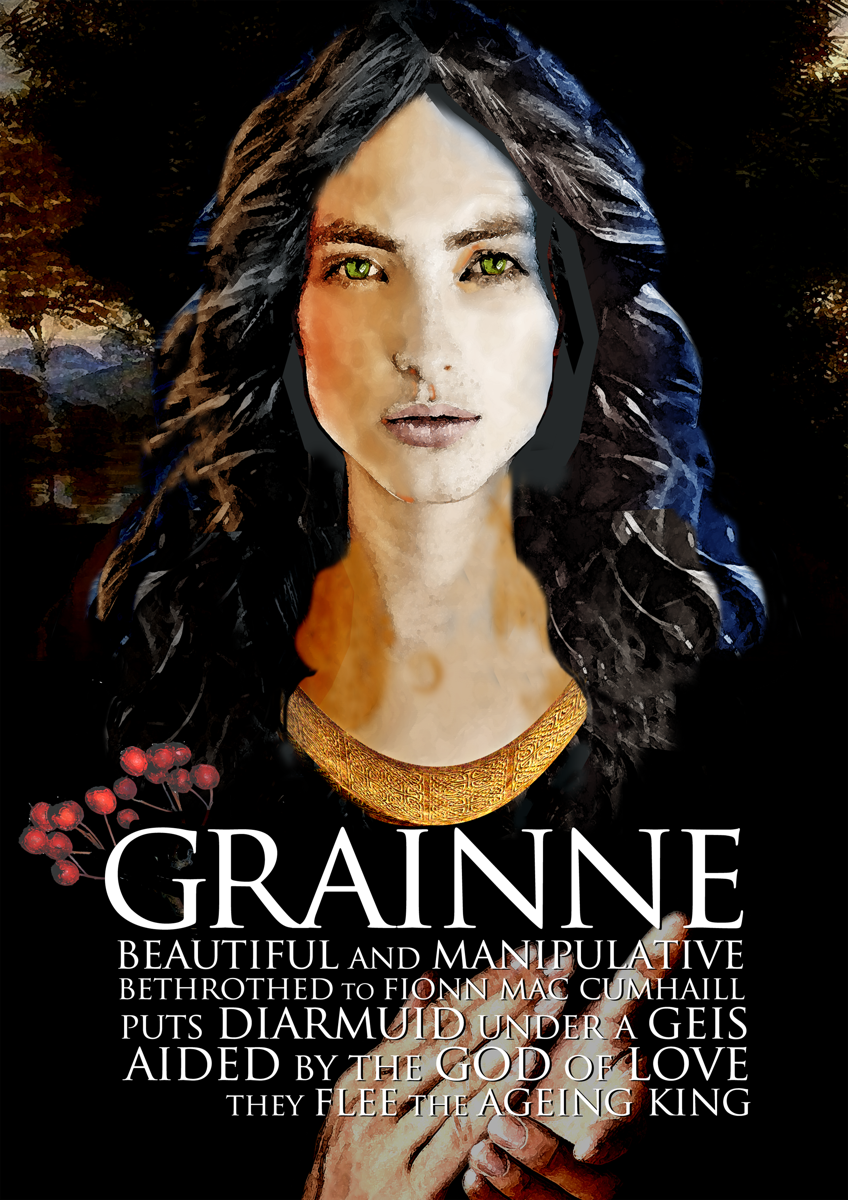 Here are some of the connections and insights made by participants. This is the Bard’s Mythic Method. The assumption is that oral storytelling is always heard in terms of modernity.

Connection 1 – Romance and the Romantic Tradition
Diarmuid and Gráinne is one of the great love stories in the Irish Myth Tradition.  Here the two lovers are pursued – a love triangle, and with obvious echoes of the Arthurian amour courtois, courtly love tradition. This connection was noted.

Connection 2 – The Agency of the Woman – Gráinne
In this story it is the woman that has the power.  It is Gráinne that puts the geasa on Diarmuid.  This represents a marked development from the almost total lack of power of Etain and Fuamnach in myth of Midir and Etain. It is different to the final loss of power in Deirdre of the Sorrows as Naoise finally succumbs to the heroic warrior code to an empowered female figure.  Cuchulain’s wife Emer and Gráinne have the most agency of the heroine figures in the Irish Myth tradition. Overall though many commentators see in Irish Myth, the dominance of the Feminine.

Connection 3 – Male figures as weak and insecure
Diarmuid and Fionn both have little agency in this myth.  And Fionn, after the heroic role he plays in confronting the fire breathing beast who is destroying the King’s Hall in Tara, is reduced to being a vengeful old man pursuing his beloved Diarmuid.  And when he has the opportunity to save Diarmuid with the healing water he has cupped in his hands he chooses to let it pour out – and Diarmuid dies.  Ego, pride and desire are clearly a powerful driver for Fionn – and indeed Gráinne.

John Moriarty, the Philosopher Mythologist had little time for this great archetypal figure, Fionn. He had even less time for Cú Chullain.

Connection 4 – Was Fionn guilty?
The group were asked at the end to reflect on the question, was Fionn guilty of the murder by neglect of Diarmuid at the end of the story?  Should he have saved Fionn?  The great majority argued in defence of Fionn making the point that the forces of fate rendered him unable to have done otherwise.

But, we have to ask where were the restorative justice principles of the Brehon Law in such an outcome?  Was the damage restored, were lessons learned and was the situation going forward a better one?

Connection 5 – Keshcoran – World Making
For many years Diarmuid and Gráinne settled down and made their life, a successful one, in Keshcoran.  Unlike the mythological cycle where different forces would wipe out any world, any division that was created, unlike Cuchulain who was defending or Fionn who lived fully in liminal space, here is a serious attempt at world making.

Until that is, Gráinne seeks to bring Fionn back in ……..

Connection 6 – Alternative Versions
In one version of the story Diarmuid dies after Fionn fails to get him the healing water.  And the story ends.  In another Gráinne takes Fionn as a partner.  It is clear that you don’t need to do much to a story to totally change its meaning. The group did not have time to explore the significance of these alternate versions.

Connection 7 – Arbitrariness of the Geasa
Unlike the geasa that are serving political/leadership purposes, especially in the King tales, here the geasa do not have any higher societal purpose.  This geasa is about love!  But does the geasa in this portrayal capture another unconscious force, in the context of love, falling in love which has considerable power over the individual.

Connection 8 – Fate versus Free Will
There is a massive tension that underlies the story.  It is between fate and inevitability and will and choice.  This leaves the listener with thinking to do.  Where do they come out on the dramatic tension?  Does Diarmuid have agency? Does Fionn?

And maybe that is the point.  The story asks some fundamental questions and leaves the listeners with an abundance of stuff to debate. Some of this tension came out in the discussions and was seen as relevant to today’s culture.

Connection 9 – The Importance of Place
The travels of the two lovers across the country, all the places they stopped and lay down creates a wealth of associations with place.  Among the most dramatic of these is the dolmen, the bed of the lovers at Poulnabrone.  The physical landmarks and locations make the stories constantly salient when living among them, seeing them through the window, climbing them, navigating by them when driving.  And of course thinking of the associations between this world and the other world – the rowan tree appears again.