Cursed to create nothing, create for millennia

Partholón and his people were the second great invasion in Lebor Gabála.  This giant of a man travelled with his family and people all the way from Sicily.  He was cursed to create nothing after committing the ultimate crime of patricide and matricide to ensure his brother ascended to the throne.  Yet he was to deliver, ironically, the foundations of sustainable prosperity in terms of foundational sources of income that would serve Ireland to today.

When the Partholónians arrived they were challenged by the Formorians for dominion over the land.  These were magical battles and no one was killed.  But the Partholónians won and the Formorians departed.  They were to clear the plains of Ireland for agriculture having brought cattle to Ireland.  They also started brewing and tourism.  Together these three initiatives were to prove the basis for sustainable prosperity through to modernity.  Their great quality was to craft something out of nothing.

Partholón then decided to make a tour of the Island.  He left his wife Delgnat at their home. There was a servant called Topa.  She was to seduce Topa and after sleeping together they drank ale from one of Partholon’s own cup.  On return he was able to taste his wife and Topa’s lips from the cup.  He flew into a rage of jealousy and killed Topa.

He then turned on Delgnat.  She argued she was in the right and the fault was his not hers saying ‘the woman will take the honey, the cat will drink the milk’.  The people found in favour of Delgnat.  This was the first judgement.

The Partholónians were wiped out in a week in a great plague and buried in Tamhlacht meaning Tam (plague) and Lacht (stone). This is the place that is modern day Tallaght in South West Dublin. 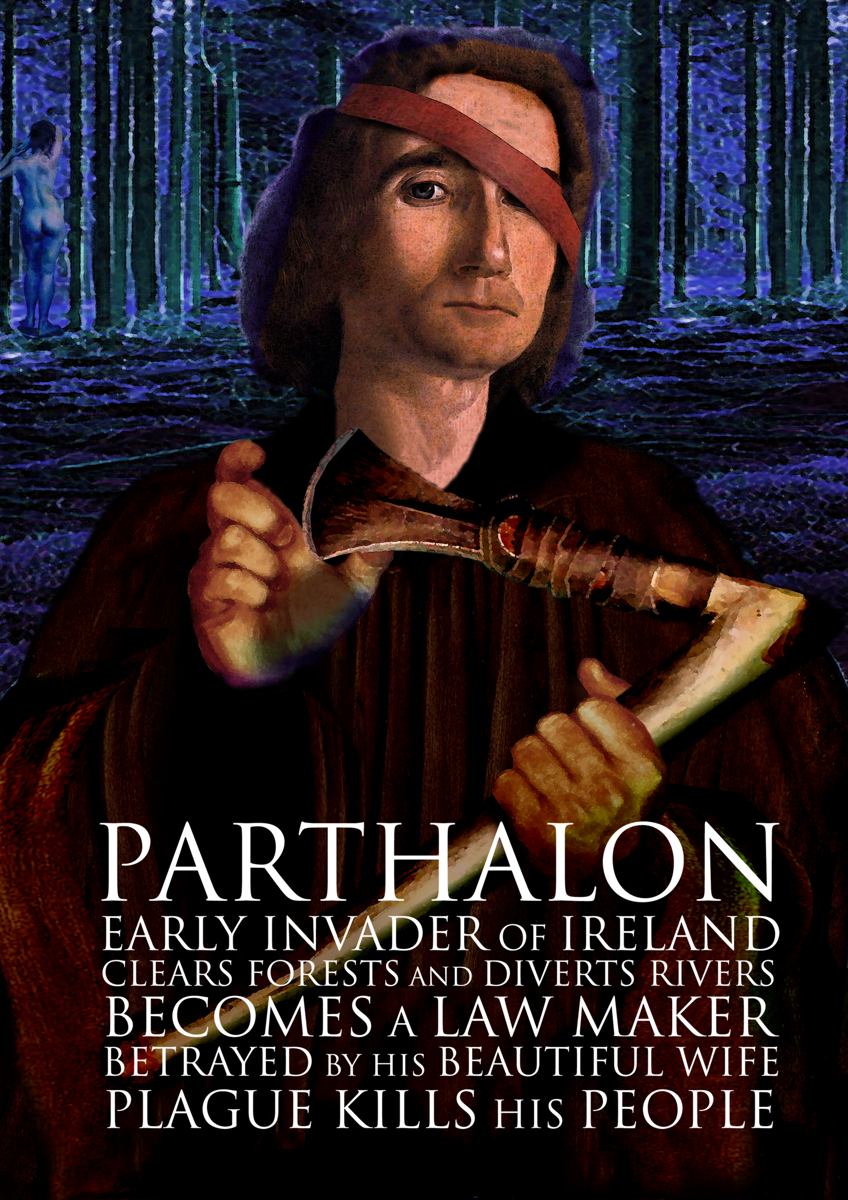 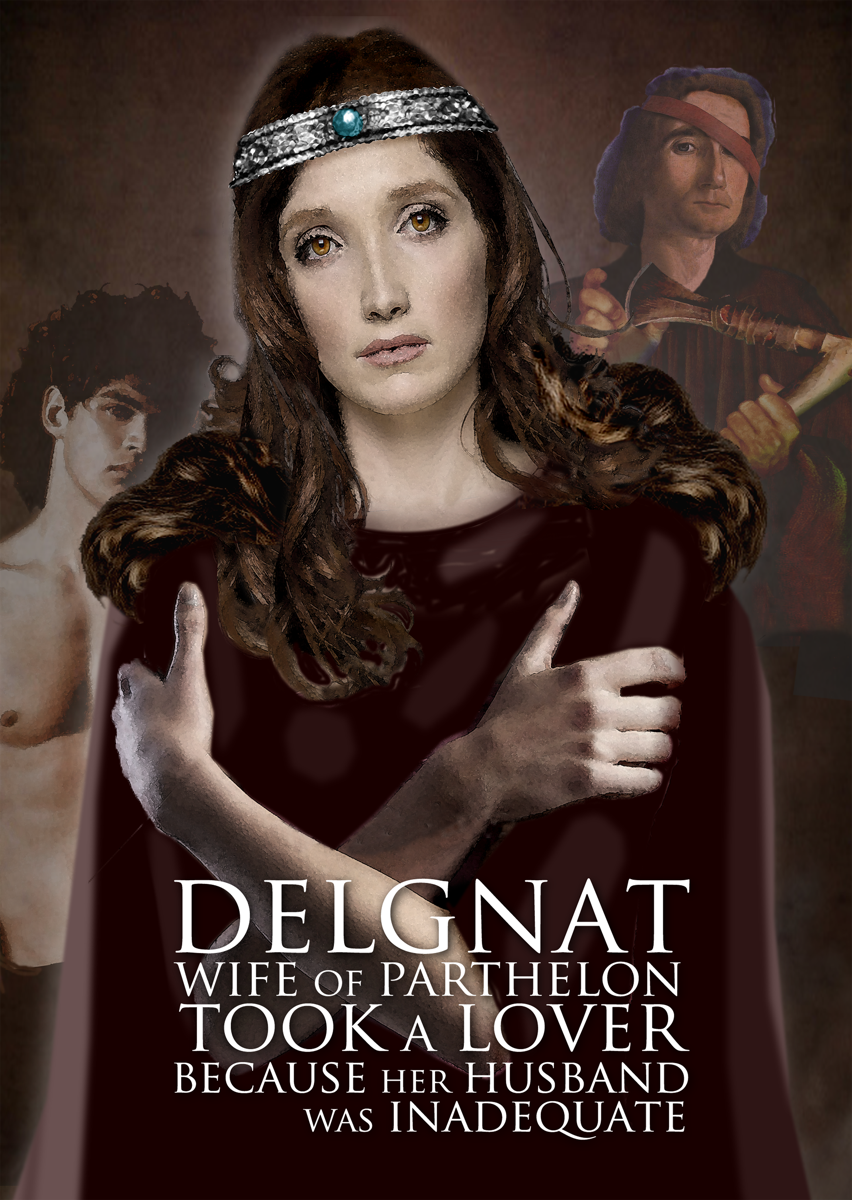 Connection 1 – Significance of the “Firsts”
This story established a number of significant firsts: the agriculture, brewing and tourism as well as the first jealous, the first judgement.  For archaic peoples these ‘firsts’ were extremely important.  This was all about establishing a precedent. This matter of “firsts” was noted again and discussed.

Connection 2 – The Irony of the Not Create/Create
The person and the people cursed to create nothing of value yet manage to create source of sustainable prosperity that have been at the core of the Irish economy for millennia is remarkable.  Agriculture, Brewing and Tourism are Ireland’s core industries today, centuries later. The not create/create is obviously so ironic.

Connection 3 – Was this really the ‘First’?
Some participants queried that Partholonians as the ‘firsts’?  Was this really so?  Why wouldn’t Ceasair’s people have been first especially with their shipbuilding skills?  Is this because some versions of Lebor Gabála – ‘The Book of Invasions’ – begins with the Partholonians?

Connection 4 – The Natural World: it gives and it takes
What is evident is the lands generative and supportive response to the Partholonian’s victory over the Formorians.  The symbolism of the ‘lake bursts’ and the water coming up through the surface seems to indicate an alignment of human and natural worlds.  The matter of nature sending fortuitous happenings on certain important occasions suggests the matter of alignment was very central in this ideology and world view.

And also in reverse!  Nature also takes away as the plague wipes out the 9,000 Partholonians in a week. One recurrent theme in the mythology is the inherent precariousness of man’s place in the universe.

Connection 5 – Were their creations good?
Some participants questioned whether the establishment of lasting rules and principles, imposing order on to natural chaos were good?  Did Partholon represent the beginning of restriction, materialism and power structures?

Yet this was an ideology/mythology in its earliest formative stage.  Some of the later developments, especially Fintan and the Settling of the Manor of Tara was to get out structures such as the Fifth Province where anything that was to get out of balance could be addressed.

Connection 6 – The Battle with the Formorians
The nature of the battle with the Formorians seemed weird to a modern listener. Standing on one leg with one arm tied behind the back and one eye closed is hardly a typical means of combat.   This establishes it as a druidic battle, a magical battle…. and with no casualties …. yet still with considerable political and cultural significance. What else do we have to understand about these peoples that makes little sense to us but may have wisdom we still need to uncover.

One participant referenced Chinese Qigong and the use of static poses to force open stuck energy, meridians, restoring health even for people when western medicine had been given up on and sent home to die.  Reference: Miracles of Chinese Healing by Luke and Frank Chan.

Connection 7 – Chosen/Not Chosen
The matter of Chosen and Not Chosen is interesting in the case of this story. If Cesair as outcast, refused a place on the Ark by Noah was to begin the Not Chosen Theme of this Immersion. The Partholonians were to carry it on. In the sense that Partholón had committed what seems to be two terrible crimes, in matricide and patricide, he and his people are also “not chosen” peoples. But then we have the matter of the Formorians. These people seem to be the indigenous peoples albeit that they are invariably demonised and “othered” in the texts. In short, the matter of Chosen and Not Chosen is very present, but it’s complicated.

Tuan is a shape shifter, a hermit who has lived through the key stages in the mythic history of Ireland as captured in Lebor Gabála, the Book of Invasions.  It was to St. Finnian that he told all this history he had lived through.  By then he had grown hairy, wizened and grey.

When he first encounters St. Finnian, the saint seems to Tuan to be a bit of a pest.  The saint has explicitly sought out the gentleman who is the follower of ancient ways.  And it is clear his intention is to preach and tell Tuan of the new god and his objective to totally banish the memory of the old god. Tuan is having none of it.  He barricades himself in his house and shutters his windows.  But the saint is nothing if not persistent.  He bangs on the doorstep intent on appealing to Tuan’s good nature and the emotions of hospitality to strangers. Tuan waits and waits hoping that the saint will leave.  He sees it as a combat of the gods.

Eventually he relents and lets in the persistent saint.  And the saint is interested in his story, the mythic history of Ireland since the time of Parthalon.  Tuan tells him of the various invasions and how by shapeshifting, a stag, a boar, a lamb and a salmon and his experience of the Parthalonians, Nemedians, Fir Bolg and Tuatha de Danann.  As salmon he was caught and eaten by the wife of Cairill and by such she becomes pregnant.   It is said that the persistent St. Finnian succeeds in baptising Tuan into the new faith.  “Your house will be illustrious” Tuan tells the Saint. 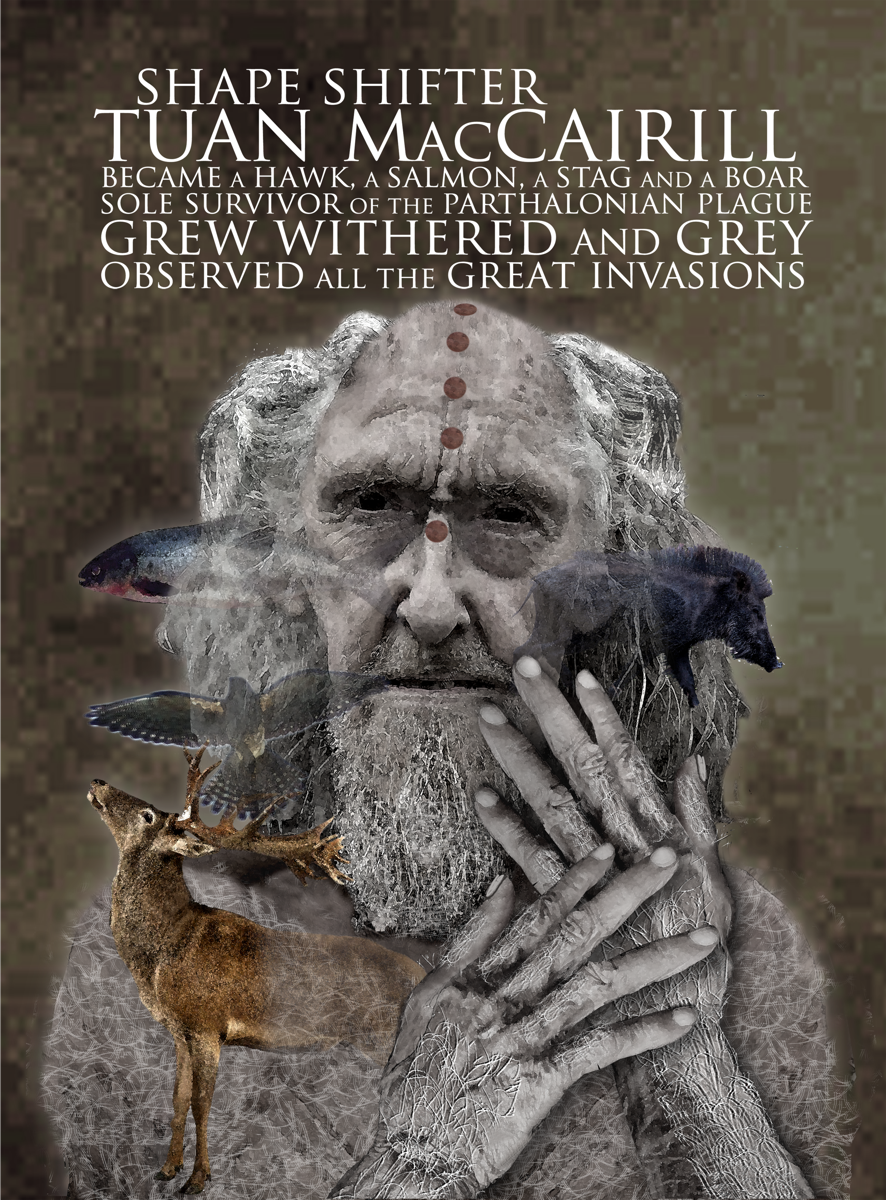 Here are some of the connections and insights made by participants based on the Bard assumptions that oral storytelling is always heard in terms of modernity.

Connection 1 – Layering of Cultures over Time
One of the perspectives that comes from longevity such as with Tuan is the sense of the layering of cultures over time, the sense of the strengthening effect of outsiders and the meaninglessness (and dangers) of the search for an original purity.  Tuan, like Fintan MacBochna, would have had a unique diachronic (through time) perspective

Connection 2 – Shapeshifting and the evolution of Consciousness
Pig/boar – Qualities of prescience, future-vision, short legs, lives close to earth, receives messages directly through hooves from the Earth. Pig/boar  represents a stage of consciousness development. A natural Developmental milestone in human growth. A Pig has total focus on taking care of physical needs and wants. This is the healthy, positive side of hedonism. Learning to take care of the physical self. The mental peace represented by the simple bodily enjoyments in the existence of a pig’s life.

*[In Qigong, being a “Chi-Pig” means allowing healing Qi to flow in and be accumulated in your body. Feeling worthy of receiving healing Qi, from Wan Yuan Chi (Universal Chi) or from/through other caring people.]

Hawk – Qualities of higher view. Insights which are only gained by choosing to see things from a higher perspective. Represents the stage of consciousness development where you gain a wider vision. Awareness of not merely how something will affect yourself, but moving beyond (hedonism and self-focus) to seeing the interconnectedness of all. Sharpness of vision. Incisiveness, logic and rationality, practicality.
Salmon – Qualities of flexibility, quick responsiveness. Quick and appropriate responsiveness. Picture the way a salmon leaps, turns and flashes in the sun. It is hard to grasp, easily shifts direction. Ability to react appropriately in a flash, to any occurrence, shadow, or threat.
Wisdom in action IS literally being “in the flow” connected to the flow of life. A fish actually breathes the water. It is not merely in the water, the water flows through the fish. The salmon IN the water, represents being IN the flow of information-intelligence (Yi), which is carried upon the flowing Qi, the life force. Reference: Reflections on Animals and Consciousness from Karen Jeffers-Tracy.

Connection 3 – Shapeshifting and Native American Culture
Native American vision quest often involves discovering your special animal. Choosing or receiving an animal totem, your personal spirit animal. When you ask our spirit animal how they would handle something, you gain a new insight  that was not available to you before.

Human beings have the ability to project our consciousness “as if” we were seeing from another’s point of view. Another person’s. Or an animal’s. When we take time for that serious kind of “play” we gain a wider deeper kind of wisdom.

Connection 4 – Layering of Culture
In one group it was discussed, in the story –  with the layering of cultures in Ireland, and now in any place on Earth – it is faulty and dangerous to claim that anyone is the first, original, or “pure” or to argue about who came when and where. What’s more, the human family needs outsiders to come in, or your genetic pool becomes weaker.

Indigenous culture itself is not static. It grows and changes. There are things to learn from the past, but also things to put to rest from a previous mindset no longer appropriate for a global family – such as superstition, omens, taboos – things which contract rather than expand human potential.

Connection 5  – The Not Chosen as Outsider, even Shaman
There is a strong outsider quality, one of the not chosen. From an obvious angle is this the typical Christian writer as framing the older tradition, the shamanic as not chosen. But more significantly, the shape shifting, the appropriation of animal forms is a type of “not chosen-ness”. And if this shape shifting identifies Tuan as shaman, this is also a tradition of wisdom coming from the outsider, the not chosen. And yet these figures were highly valued for their healing.