Ireland was left empty for 200 years after the Nemedians were scattered.  The survivors of the Nemedian attack on Conand’s Tower who fled to Greece following Semeon, faired very badly there.  There were enslaved for 200 years and made to labour long hours under the hot sun, carrying heavy sacks of clay on their backs.  Their task was to carry the clay to rough mountain peaks until the mountains had such a covering that they became as flowery and fertile as the plains.  They became known as the Fir Bolg, which means the men of the sacks because of these sacks of clay that they were always hauling.

But the Fir Bolgs kept their spirits up by telling each other stories of Ireland, their birth right.  And at last the day came when they were able to escape.  They used the very same sacks that had been their burden to build canoes and coracles and fled from Greece.

The Fir Bolg fleet, such as it was, did not hold together on the voyage and the people landed at different times.  One group, led by the Chieftain Slanga, and his wife Etair, landed first on Saturday the 1st August and then the Chieftains, Gann and Segann, landed on Tuesday with their wives and Oist and Fuath and all their followers and on Friday the last of the Fir Bolg arrived led by the Chieftains, Genann and Rudraige and their wives Liebar and Connacha.  They met together and decided that since they were all kin they would consider this the one taking of Ireland and not fight among themselves.  No lakes burst forth when they landed and they cleared no new plains nor had they to fight against the Formorians for dominion over Ireland.  They did decide to divide Ireland between these five chieftains and that was the first division of the provinces we still know today.

The Fir Bolg ruled Ireland for thirty seven years and had nine kings in all that time. Their first high king of Ireland, Slainge, was the first person ever to be the King of all Ireland. But he only ruled for a year before dying of the plague.  The last king, Eochy, ruled for ten years and during his reign there was no wet except for the dew which fell at night and no year without harvest.  Falsehoods were expelled from Ireland and the law of justice was enacted for the first time, but at the end of thirty seven years, King Eochy was brought news, a new group of people had come to Ireland and they had burned their ships behind them on the beach.

The Tuatha de Danann had arrived.

The Book of Invasions

The Book of Invasions – Part 4: The First Battle of Moy Tura 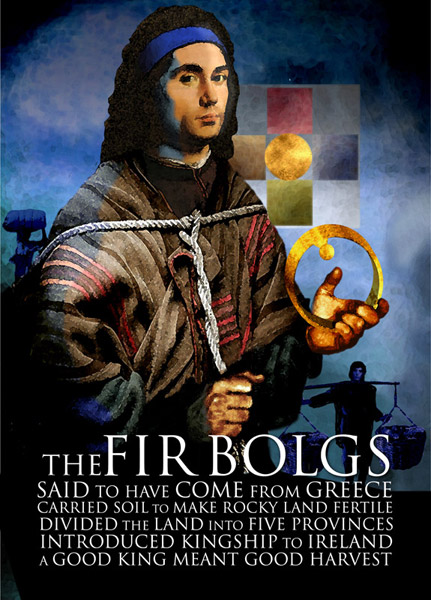