Ireland lay deserted and empty for 300 years, until on a Tuesday the 14th May a new group of people arrived landing in the estuary of the river Shannon.  These were the followers and family of Parthalon, a giant of a man who had travelled to Ireland all the way from Sicily.

His journey began when he committed a terrible crime in his homeland.  In order to ensure his brother ascended to the throne Parthalon killed his own mother and father.  This invoked a terrible curse that nothing he did would ever succeed.

Parthalon and his people travelled from Sicily to Greece and then on to Cappadocia, through Gothia, and finally to Ireland via Spain, a journey of just over a year.  The land that they found was not empty.  Parthalon was challenged by the shape shifting magical people known as the Formorians for dominion over the land.  They fought a magical battle standing on one leg , with one arm behind their backs and one eye closed. Though no one was killed on either side, Parthalon and his people won and the Formorians departed.

Lakes burst forth from Ireland at the moment of their victory.  The people of Parthalon were industrious and set about clearing plains for agriculture.  He had brought four oxen with him, the first cattle in Ireland and a man named Breigha built the first dwelling in Ireland and was the first to cook food in a cauldron hung over the fire.  Somalia was the first to brew ale and to start the tradition of stewardship and Beur was the first person in Ireland to have a guest stay in his house.

Parthalon’s sons were the first to make a division of Ireland and they divided it into four parts.   The Parthalonian skill was in crafting something out of nothing.  They created sources of prosperity that were to last.  The main industries and means of providing for family and community and started traditions of hospitality and generosity that endure to this day.

Parthalon then made a tour of this new land to see all that had been created. He left his wife, Delgnat alone with a servant called Topa.  While he was away Delgnat seduced Topa and after they had slept together, the two of them drank ale from Parthalon’s own cup.  When he returned Parthalon drank from the same cup and tasted his wife’s lips and the servant’s lips on it and knew at once what had happened.  He flew into a rage, killing Topa, and striking Delgnat’s hound so hard he killed it too.  This was the first jealousy in Ireland.

When he turned on Delgnat, she said she was the innocent party and that the fault was his and not hers, ‘honey with a woman, milk with a cat, food with one generous, meat with a child, a craftsman with an edged tool, one before one earns great risk, the woman will take the honey, the cat will drink the milk, the generous one will give away all the food, the child will eat the meat, the craftsman will lay hold of the tool, the one with the one will always go together’.

It was agreed by all those who heard that Delgnat was in the right and this was the first judgement in Ireland and was later called the right of his wife against Parthalon.

Parthalon’s people thrived in Ireland was many years until they numbered nine thousand and then in the space of only one week Parthalon’s curse caught up with them and a plague wiped out everyone.

The Book of Invasions – Part 2: Partholon 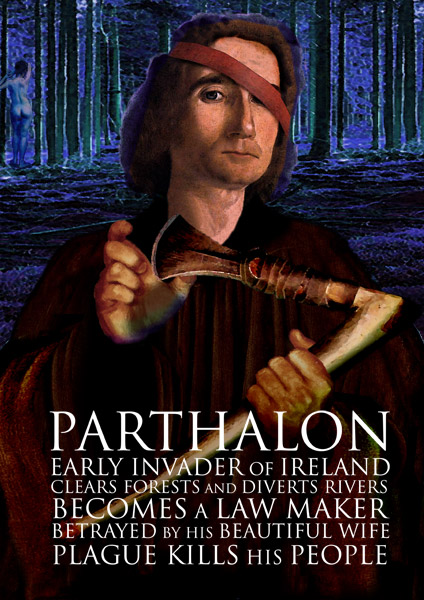