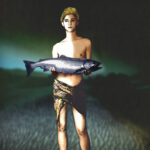 Many animals within Irish Mythology play important parts. The Salmom of Knowledge is one such creature, and it has already been described how tasting the skin of this fish was enough to endow Fionn MacCumhal with great wisdom and foresight, making him the most respected of men among his contemporaries. The Wild Boar is another […]

Background Diarmuid was a young lieutenant of Finn, the now aging hero and leader of the Fianna. At a banquet Grainne, who was at the time betrothed to Finn, fell in love with the young hero Diarmuid. She placed him under a geis, a bond that compelled him to take her from the palace at […]

BackgroundFinn (Fionn) was the hero of the Fenian cycle and was the greatest leader of the Fianna. He was born after the death of his father, and so reared by a wise woman who taught him well, and encouraged a strong affinity to nature. Tales of FinnHis first major act was to kill his father’s […]

In Ireland long ago there was a powerful fighting force called the Fianna. This was a group of young men, who lived off the land, hunting and tracking in the summer months, and feasting and merry-making throughout the winter. They had all given up their family ties and their places in society to live this […]

There was nothing the great Finn Mac Cumhaill liked more than a feast with a story and song, except for a hunt with his hounds and his men. He was out one day hunting, enjoying the freedom of running through the land, with his hounds Bran and Sceolan by his side, and the rest of […]

Listen To The Stories